After recruiting students from Nepal and India for the University of Nebraska at Kearney for over a year, I finally traveled on business to these two destinations for the first time ever from August 22 to 25, 2017, before flying into Korea to wrap up my trip. A colleague who has explored India for a month almost a decade ago informed me on the economic and social difference between the country and the places to which I am accustomed, that I would experience an underdeveloped country. I had assumed Nepal would be similar to India due to the two countries’ physical proximity. 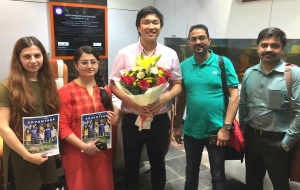 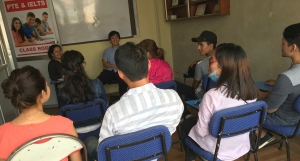 Waiting for my Uber by the Delhi Airport, I sweated profusely as if in the sauna due to the humidity level at what I assume to be nearly 100%. I had believed drivers in South Korea to be the absolute worst in every sense of the word until I heard honking every second and saw zero drivers sticking to their lanes and every driver impatiently cutting. The original Uber driver who was connected to me canceled after making me wait twenty minutes, and the replaced driver was immediately stopped by the police for “not wearing a uniform,” or a formal attire; the latter driver was allowed to proceed after paying a fine of Indian rupee’s equivalent of just over $1. Line simply does not exist in India. As I waited to ask about my boarding ticket to Chandigarh at the Delhi Airport, one clumsy man cut me as if I had become invisible, and I asked, “Are you with these two?” pointing at the pair of men next to him. I then said, “I am in line,” at which the cutter looked confused and to which a tourist from a different country said, “That doesn’t exist here.” A couple more individuals cut me seconds following, and I had to almost push others away for my turn. As I presented my boarding pass to Kathmandu to a security officer and he examined it, a man behind me reached for the officer over my right arm with his own boarding pass. Each time I went through security, a group of Indians tried to cut and/or stayed so close to me I could feel their bodies touching me. However, just like honking, cutting is deeply ingrained and the norm in Indian culture that no resident considers that to be rude. I cannot even attempt to count how many times I instinctively said in frustration and disbelief, “Excuse me.”

In Kathmandu, I noticed drivers did not honk as much, as doing so “is illegal in Nepal”; nevertheless, their hazardously cutting and staying out of their lanes felt similar to India. Each time I opened my eyes and looked straight, they were struck by dust and I had trouble opening my eyes.

My first time in India and Nepal, I felt I was observing the Republic of Korea of 50 years ago. The majority of buildings in Chandigarh remained under construction to the point I wonder where the city will be in two or three years. I could see why entrepreneurial-minded individuals say India, especially with its immense population of 1.345 billion, offers many business opportunities. Rather than complaining about the discomfort as I might sound like I am in this post, I was humbled and realized how much God has blessed Korea, the United States, and virtually every nation in which I had ever set foot.