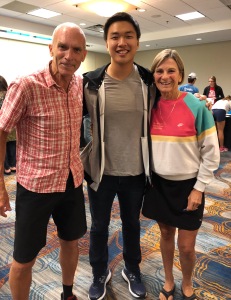 Days prior to my three-week business trip to Korea, I received a voice message stating my name was drawn for a free massage from Essentials Natural Family Health in Papillion, Nebraska, from a raffle at my most recent running event, Beat the Heat 10K. Upon my return to the United States, I sought another race around this area because I refused to drive three hours out and three hours back solely for a massage. I signed up for 13.1 miles in the Heartland Marathon, beginning and ending in Omaha, Nebraska, but taking place mostly in Iowa, on September 23, 2018, only a few days before the event. I felt slightly concerned about my only having run on the treadmill several times while away and not having fully overcome jet lag. 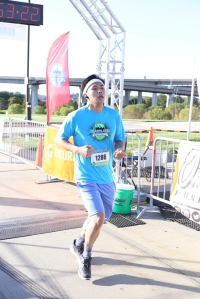 I arrived in Omaha a day early for the Expo, where I met many inspirational runners, including legends Bart Yasso and Jane Serues, guest speakers, and an elderly man who had completed 405 marathons, seven times in all 50 states. Come race day, I had no expectations but simply hoped to score another sub-two-hour half marathon in this beautiful weather for running. I also did not anticipate to run mainly uphill the first three to four miles, at which point I dropped any desire for a strong performance. Nevertheless, as the course, comprising both roads and trails, flattened out on mile five, my body swiftly recovered and I increased the pace and stayed near the 1:55 pacers, which told me I could still potentially break my personal record (PR) of 1:56:55 from over a year ago on a far-less technical and slightly-shorter course. 8 miles in, still full of energy, I passed the pacers and did not see them again until post-race; a new PR seemed almost inevitable. 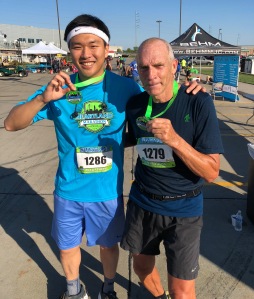 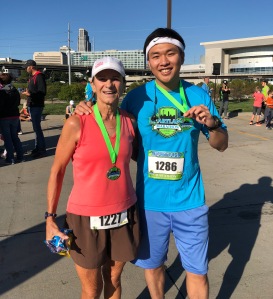 With a mile to go, I climbed my way up on the Bob Kerrey Pedestrian Bridge that divides Nebraska and Iowa from the Iowa side, which, maybe due to chugging water right before, made me feel nauseous; approaching the finish line, I came close to throwing up four or five times, which prompted me to pray to God dearly not to let me vomit in front of all these individuals cheering. Especially considering the consistent hills and my just having come back from a lengthy overseas trip, I was pleasantly surprised with the new mammoth PR of 1:53:05, beating the previous by three minutes and fifty seconds and enough for 54th place out of 248 runners. I wonder how I would have performed on a less difficult course, whether I would have run faster or I deal with hills efficiently. Thank You, Jesus!